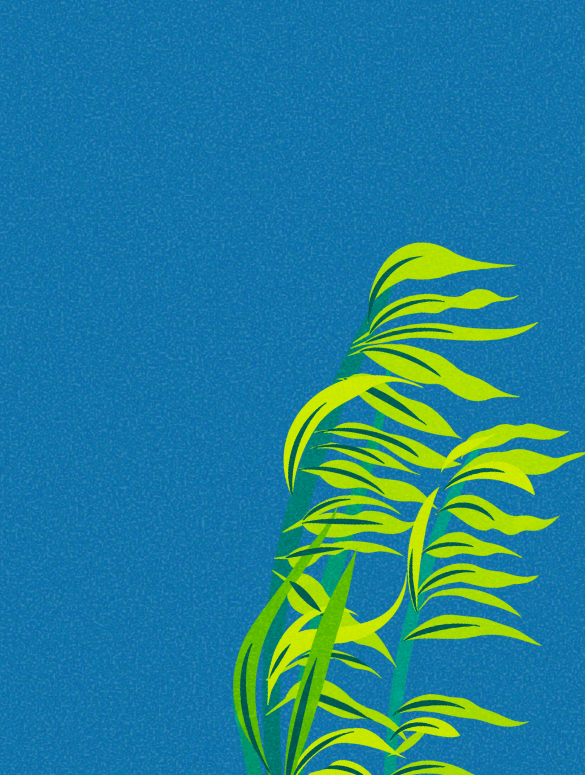 The Future of Cuisine is Growing in our Oceans.

Mother Nature invented two technologies that we can use to mitigate our harm, shellfish and seaweeds.

–Bren Smith, author of Eat Like a Fish and founder of GreenWave

Eat like a Fish is Bren Smith’s mantra and the title of his book. He is also the Executive Director of GreenWave, an organization that champions and assists ocean farmers in the United States and internationally. Smith believes the future of food will involve farming over 500 varieties of seaweed such as dulse, kelp and nori, for food and a host of other uses. Smith notes that this revolution is going to take a change in our taste and behaviour. To help the industry succeed, Smith and other Ocean Farmers including Leslie Booher of Sunken Seaweed, believe we need to begin to cook with seagreens.

Bren Smith as well as Leslie Booher spoke with Nature X Design about seagreens as a food source. Enjoy this piece from our larger project on the future of Taste. To learn more about Ocean Farming, read A Blue Future Through Ocean Farming and please visit GreenWave.org The Culinary History of Seagreens

According to Bren Smith, seagreens are not just the foods of the future, but the foods of the past that need to be reintegrated into our diets. The history of seaweed in cuisine reveals rich and complex flavor profiles that have been forgotten, but can be utilized by chef and amateur alike today. Such as the seaweed potato, which involves planting potatoes in dulse, which acts as a nutrient-dense fertilizer and an umami flavor enhancer for the potato itself.

As outlined by Smith, “there is a skepticism that we can change what is on our plate to something as ‘unAmerican’ as seaweed. But there is this whole culinary history of seaweeds in the West. Harvesting seaweed has been happening in North America for 5000 years. There was the kelp highway going all along South America. Even hundreds of miles inland people were eating seaweed. There was the seaweed potato.”

There was seaweed as a bar food in Irish and Scottish pubs. Italians used it to ferment their cuisine. It’s just been completely lost.

“It turned out that what I needed was the brilliance of chefs that specialize in vegetables. So I gave it to a chef, Brooks Headley, in New York City. He made barbecue kelp noodles with parsnips and breadcrumbs. No one even thought of it as seaweed because you get that heat of the barbecue sauce, the soft roundness of the parsnips. So the noodles as a delivery device that we all know and eat, the kelp is a great noodle because it stays al dente. And no one even blinked at it. And that was the beginning of the journey of really trying to figure out what are the new kinds of flavors and mouth feels we need to bring to the kelp that we grow.”

Since working with Headley, Smith has spread the movement to other chefs and restaurants. He also included recipes in his book Eat Like a Fish to help the average cook incorporate seagreens.

Beyond taste, the average consumer has to balance nutrition, access and sustainability within every food purchasing decision they make. Bren Smith had a simple reason for consumers to turn to seagreens rather than seafood:

Why are we eating fish for Omega 3s, rather than eating what the fish eat? I wish this was more complicated, I’d sound smarter.

Smith continued, “fish don’t make omega 3s, they eat them. So by eating like fish, we get the benefits while reducing the pressure on fish and fish stocks. Seaweeds have more protein than red meat, more vitamin C than citrus fruits, more vitamin D than milk. They are stunningly packed with nutrients. We are in this historical moment where we need to grow food that is resilient. For me that happens to be kelp, which is absolutely disgusting. Look, I have no interest in eating it at all.”

But when we hand it to our chefs they can they transform it into something that is palatable, beautiful, delicious.

Beyond Delicious, The Need for Seagreens

Smith is not alone in his mission to change our plates; Leslie Booher, a California based ocean farmer and co-founder of Sunken Seaweed, focuses her work on researching seaweeds as well as growing them. Her organization hopes to improve growing techniques in order to aid other farmers. When speaking with Nature X Design, she noted the importance of growing the seaweed industry to achieve the valuable goals of Ocean Farming:

The overarching goal is to reforest the coastline.

Booher continued, “the reason my partner and I got into this was because we were living in the Humboldt area studying the coastline as part of a surveying team. And during that time we saw this kind of systemic collapse of the ecosystem up there that resulted in about a 96% loss of kelp canopy. So that was a wake up call to create a career, an industry reforesting kelp and reinvigorating those ecosystems. So the mission of ocean farming is to leave the ocean better than we find it. Constantly working towards reforesting kelp ecosystems.”

Thanks to Sunken Seaweed, GreenWave, and other ocean farming organizations, you will now see seaweed dishes on more restaurant menus and can have it on your plate at home, as many ocean farmers now offer home delivery. To begin the journey to eat like a fish, find recipes featuring seagreens from Chef Brooks Headley here. Bren Smith spoke to us as part of our series on Taste.

A lifelong commercial fisherman, he was named one of Rolling Stone magazine’s “25 People Shaping the Future” and featured in TIME magazine’s “Best Inventions of 2017”. Bren Smith is the winner of the Buckminster Fuller Prize and has been profiled by 60 Minutes, CNN, The New Yorker, Wall Street Journal, National Geographic, and elsewhere. He is an Ashoka, Castanea, and Echoing Green Climate Fellow and author of Eat Like a Fish: My Adventures as a Fisherman Turned Restorative Ocean Farmer.